Strange News From Another Star 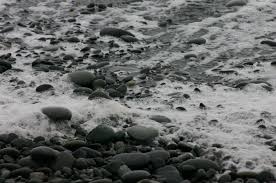 The waves break on the black-stone beach.

The pebbles rattle as the water pulls back, gargling.

The dead sun overhead is slowly stripping the atmosphere away from this rock; it’s been forty-six days. There is nothing new to report.

Day forty-nine, by the Terran calendar. The concepts of ‘day’ and ‘night’ have no meaning, beneath the technicolour consumption going on upstairs. Day and night have no meaning, shadows are stretched, muted, changed – there is more than one shade of black. Black has no meaning, anymore, as subtle purples and blues and reds seem to erupt from the pebbles on the shoreline like flowers. Is this something I should report? It feels more like an isolation experiment than an exploration – maybe it’s both.

Where is Terra? Maybe I should ask the computer. The purple-blue-black-red-green sky is holding back the stars – in its death-throes the star has captured this planet, it’s now tidally locked, one side ever facing the monster in the sky that is peeling away the atmosphere in vast swathes. I sped over the dark side coming in to land, a featureless mass that suddenly gave way a twisted sun-line. New flowers open up daily on the beach; I’ve moved the rover away from the shore. They shine like gemstones, in the multi-coloured rain, but disappear when I stretch out my hand. The computer cannot tell me how long we have before the atmosphere is gone. Maybe I’m asking the wrong questions.

Further from the landing site now. The pebbles are gone, replaced by a fine, grey sand that clogs the rover’s ventilation system and lays a soft silt on my instruments. Vacuum-sealed my arse. The flowers don’t seem to grow here in the highlands. I’ve lost track of the days that have passed, and the computer doesn’t seem to want to contribute to the conversation. The baleful, dying eye of this system is finally starting to sink beneath the horizon. I can still see no stars. When sleep overcomes me, the rover drifts to a stop; when I wake, it begins again. Or I hope it does. There is no ‘day’, no ‘night’. I sleep when I must, that is my night. When I awaken the sun sits lower on the horizon. Are we moving in the night? There is no night.

We have been moving at night. When I woke we were still moving. The computer won’t tell me why. It just hums, idiotically. I want to turn back. The sun has sunk even further, barely poking above the edge of the world. Fuck, what day is it? How long have I been here? The dust is everywhere. The computer would know how long it has been since we landed. It was never supposed to keep moving at night. I want to turn back, back to the sun.

It’s so dark here, so cold. The stars shine like solid points in the sky, like stones. Sometimes the dust whips by, thrown up into the sky by the wind, by the rover’s tires. Strange shapes form in the clouds. I want to see the sun. I’ve taken to leaving the lights blazing, even though there is nothing to see but dust. The lights burn only to illuminate the depth of the darkness. I want to turn back to the sun. The internal lights only illuminate the dust that’s settled inside the cabin. The computer won’t let me get out, no matter how much I beg. I don’t care what day it is. There is only night, now. Turn back, turn back. Let me out.

I can feel it growing inside of me. Fuck, did I say that aloud?

It’s still, here, at the outer edge of the blackness. So quiet, now. The sun has begun to peer over the horizon, blessed, beautiful.  I shoved a screwdriver into the computer – can you still hear me, you bastard? Are you still recording everything I say? I hope so, you fucker. I can feel it growing inside me. I am not ashamed, anymore, not a pinch of guilt. I can feel it  growing, I can feel its tendrils plucking their way through my veins and arteries, gently fingering my nervous system, ossifying and crystallizing my bones. I am waiting, little one.

A bloom pokes through my eye – it hurt, at first. It doesn’t now. The sun is here, and the beach. There is less water, or whatever it is. It looks like water. The sun is here – brilliant, purple-blue-black. I am a seed, or a meadow, and I am waiting for the flowers to grow.

Written for this week’s TerribleMinds flash fiction challenge: the Random Song Title Challenge. The song I got was Blur’s Strange News from Another Star. I also managed to squeeze in some of this week’s BeKindRewrite prompts: pinch of guilt and multi-coloured rain. Let me know what you think!

4 thoughts on “Strange News From Another Star”